Trending
You are at:Home»Blog-News U can Use»Adoption»Run to Your Local Zoo As Fast As You Can!!! 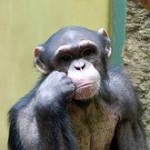 If you are involved in introducing any kind of “change”, “innovation”, process, technology etc., you may want to spend some time at your local zoo – at the chimpanzee exhibit.  In fact, you may want to take your team there for a field trip – if nothing else; it will be a good bonding experience.  You may be wary of me sending you to the animal kingdom one more time (Making Better Decisions—Bees Do It) but bear (no pun intended) with me.  If you were to go by the ten month study being conducted at the Lincoln Park Zoo, your team may actually learn some critical lessons about the spread of innovation.

They have reached some interesting conclusions which corroborate the research that we have done with actual humans (cuts down on the cost of bananas).  Adoption of innovation increases when the “perceived” value (PV) is greater than the “perceived” costs (PC) and even more importantly, the actual value realized increases(or even occurs) when adoption increases. The study identified Chuckie – the wily innovator, Optimus – the early adopter and of course the laggard with a lot of clout – Hank (how come they’re always named Hank??).  These could have been lifted directly from Geoffrey Moore’s work on Technology Adoption Lifecycle .   What you will find is that for Chuckie, it was very hard to get at the carrots so he kept innovating and found grapes (more desirable) –— PV > PC.  For Hank, who was getting all the food that he wants, PC > PV and therefore no adoption of innovation.

According to the study, “creative problem solving has come from the weakest with the least to lose” (PC low) while the strongest chimps don’t innovate.  They studied who came up with the innovation, and the spread and scaling of it – very critical and typical issues that we deal with on a day to day basis.   They created a simple behavioral economics model with “currency” and different rewards (carrots vs. grapes) to study how solutions were developed.  According to the article, this has significant synergy with how business schools teach entrepreneurship – imagine that.

For those of you that we have had the pleasure of working with recently, you will recognize the strong similarities with our relentless focus on Adoption.  Mere introduction of innovation has little or no value to an organization – unless the innovation is Adopted.  Empirical research suggests that for every dollar spent in design or creation of the innovation, an equal amount should be dedicated to the Adoption of the innovation, and Adoption is totally predicated on the relationship between the PV and the PC, as defined by the adoptees and no one else.  And I can predict with utmost certainty that if you reflect on any current project that you are working on, you can find examples of Chuckie and Optimus and Hank (no, I’m not suggesting that you work with people who look like chimps).  These are fairly standard and predictable roles that people assume in organizations and the trick is to determine and influence their PV and PC.  Without doing that, most change initiatives are doomed and the fault lies not in the innovation but the Adoption strategy of the innovation.

So stop by the local grocery store, buy some bananas and meet me at the zoo – we’ve got a lot of learning to do.