Trending
You are at:Home»Blog-News U can Use»Cheezborger – The Goat – Competency Based Talent Management

If you don’t know the history of the Cheezborger, then you missed the glory years of Saturday Night Live (U-Tube it…is that a new verb now – U tubing?).  The story of the goat and the curse is even more complicated but suffice it to say that the General Manager (Theo Epstein) of the Chicago Cubs ordered a goat delivered to Wrigley Field and consumed it there before they won the World Series.

If you don’t yet know that the Chicago Cubs won the World Series after 108 years, then you probably are living off grid somewhere.  Some of you may have heard us present at various conferences using Moneyball (book by Michael Lewis) as the case study to talk about Competency Based Talent Management.  If you have not read the book or seen the movie, then you should to better understand the connection.

The main premise of the movie is that Billy Beane (played by Brad Pitt) redefines the way talent is measured and developed in baseball and took the lowly and poor team from Oakland and converted them into a contender and thus introduced the new era of sabermetrics in baseball.  Theo Epstein is a disciple of sabermetrics and had won championships in Boston before winning in Chicago.  You have probably read or heard us discussing the phenomenon and the lessons to be learned from Moneyball for Competency Based Talent Development in our organizations. 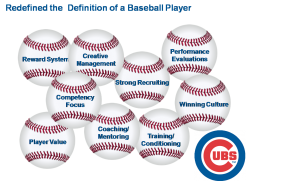 He changed the entire process of identifying, acquiring, developing and managing talent and built championship teams.  “But Epstein has also shown an ability to adapt within that vision, and avoid mistakes made by other process-oriented GMs who failed to realize that ideological purity, when taken too far, can be a fatal flaw.”.  While it took a while for the transformation to happen in Chicago (he kept getting pressured from the fan and media along the way), he stuck to his vision and kept adding and developing talent based on the new way.  Having alignment and active support from the C-Suite was the most important ingredient on the journey and he readily admits to that.

One of the traps that most people fall into who try to emulate that approach is that they emulate the process followed in Oakland, Boston, Chicago etc. and don’t emulate the underlying philosophy.  For example, On Base Percentage (OBP) was a new metric to evaluate talent started in Oakland but was soon copied by everyone else (Best Practices) thus negating the competitive leverage because now everyone was doing it!  “And while their competitors chased innovations from five years ago, the A’s changed tack and moved on to the next innovation. Moneyball isn’t about sabermetrics, but about finding market inefficiencies.”.  That is perhaps the most impactful statement to remember – market inefficiencies constantly change and it is our job to identify what they are and leverage them.  Doing what others are doing is Best Practices – Having others copy your innovations is Next Practices.

Similarly, if the Value Drivers we pursue in our processes are typically centered around price and cost, then we are doing what others are also doing and do not therefore provide any competitive advantage.   We need to identify the OBP-like metrics in our processes and when other start emulating that, we then need to identify the next level of Value Drivers to stay ahead of the competition.  And when it comes to Talent Development, too many of us may still be focused on finding people with the wrong competencies (tactical or process) because everyone else does it that way.  In fact, focusing on different competencies(Strategic) will actually produce competitive advantages.  Go Cubs and no more waiting to eat a goat or another 108 years!!