Trending
You are at:Home»Blog-News U can Use»Watch the Super Bowl with Content vs. Context in Mind

If you have been to any of our webinars, presentations, PERT workshops or training, you must have gotten tired of hearing us go on and on about Content vs. Context or how Context ALWAYS trumps Content.  While you may or may not be fans of the New England Patriots, allow me to make that argument one more time and no I cannot promise it will be the last time 😊.  While most people may think that having the best players (content) leads to success on the football field, the Patriots have time and again proven that to be wrong – they’ve never had the best players compared to the other teams.  In fact, many times they’ve taken on “rejects” from the other teams (Wes Welker, Kyle Van Noy).

The success of the Patriots lies in the “system” or the context that the owner, team and coach have created.  “Because talent goes only so far, it’s important to evaluate a team’s structure and mindset to determine its true strength.” according to Professor Kyle Emich.  He goes on to observe, “Belichick’s system is designed to emphasize specific roles linked to specific abilities (can you say alignment – which is part of context). 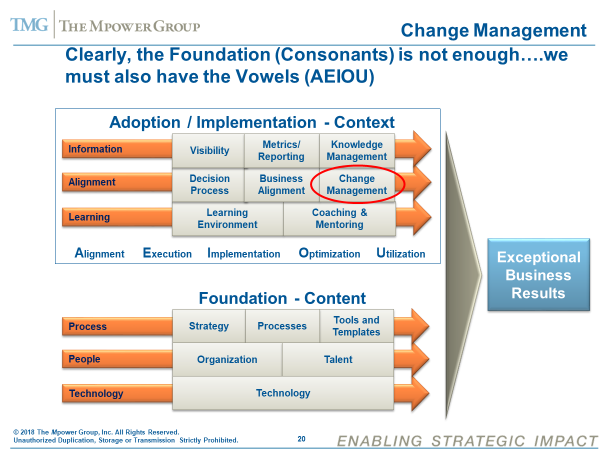 You may or may not have seen this slide from us but we’ve been using this for over 10 years to communicate the concept.  Most organizations focus on getting the content in place and then waiting for the results.  We refer to the content as consonants and obviously you cannot crate any words or language without the vowels – Alignment, Execution, Implementation, Optimization and Utilization (the context).  The boxes in the top half of the model are of more importance in delivering results.  The Patriots have cracked that code and are able to take subpar players (content) from other teams but in the Patriots’ context or system, those players excel.  Even their star quarterback (Brady) was a 6th round draft choice who was a backup quarterback and played only one game in his first season – and got the starting job because of an injury to the starter.  He didn’t get on the field in his 1st two seasons in college either.  I’m not taking away from his skills but the system or the context has as much to do with his success as he does.  The attitude that the Patriots have created leads to their success.

According to Nate Silver’s site (fivethirtyeight), “This year Belichick’s Patriots are on the cusp of doing both: overcoming adversity and a dearth of difference-making talent while outperforming every other team in the league.”.  Nate is a world-renowned statistician prognosticator who you should check out.

He goes on, “this year’s Patriots have achieved historically great results despite having fewer dominant big-name play-makers than every other…” and that they “seek out and acquire players who fit their system but whom the rest of the league has overlooked”.  Both authors are making the same exact point – the system is greater than the individual players (context trumps content).

In all the work we have done on Transformations or technology implementations, we have stressed this same exact message with every single client – most get it but sadly a few don’t.  The technology implementations that we have seen fail have the same thing in common in each one of them.  The client ignored changing the context and rushed right into implementing the technology or software solution.  Transformations that have not succeeded have the same exact thing in common in all of them – the client put new processes in place and had us train their people but did nothing about changing the context.  The move to Category Management from Strategic Sourcing can only succeed if you recognize that the context for the former is radically different.  And by the way, if you want to change your context you also have to recognize that building the Strategic (context) competencies in your organization is far more critical than the Functional (content) competencies.  I hope your favorite team wins, you have lots of cold beer and don’t run out of chili or chicken wings.