Trending
You are at:Home»Blog-News U can Use»Category Management: High Performance Work Teams – An Absolute Necessity

As most of you know, we do lots and lots of work with teams and even our Category Management practice depends heavily on working with client teams as opposed to more traditional consulting models because we ensure transfer of skill and knowledge. We are currently involved in helping four different teams setting up a number of COEs for a $130B client in the areas of Supplier Diversity, Supplier Relationship Optimization, Contracting and Analytics.

As part of our coaching, here were the roles we recommended for their teams (who are on their way to earning High Performance Work Teams (HPWT) status) and I thought it would be worth revisiting with all of you. 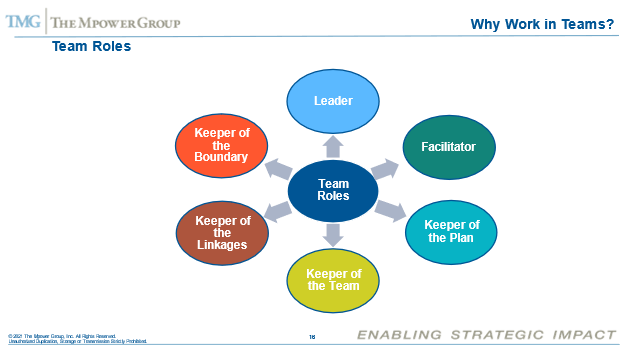 Let me discuss a few of the messages we delivered for a number of these because some of these may not be familiar. I’m sure we are all familiar with the Leader role but we encourage that the role doesn’t have to be tied to organizational titles or hierarchy and it can be rotational to help develop those competencies. Here are some other elements to consider:

Similarly, the Plan role is the traditional project management role and may include some of the following:

• Manages the overall plan for the team
• Tracks team progress against the plan and reports variances
• Understands dependencies and ensures they are being attended to
• Provides linkages to other parts of the project related to planning
• Responsible for budget, resources, etc.

Here is one that you may not have thought of before but you will quickly admit the need for it given the amount of time teams spend in meetings – Facilitator. You will be amazed at how the productivity and morale of the team improves as they get better at playing this role and here are some things to consider:

One of the most obviously needed and almost never acknowledged is the Keeper of the Team. Maintaining and improving the team’s effectiveness is directly tied to this role. And yet, this is a role that we have the hardest time convincing clients ☹. Here are some critical things to think about:

This is a competency that may require some external help till you become good at it but the return on this is extraordinary.

Of course, the last two are also important for any team’s success. In fact, how a team manages its affairs outside of the team have the most bearing on how successful it is in delivering to their goals and objectives.

Keeper of the Linkages

Keeper of the Boundary

It is often convenient to think of those as a combined role but should not be ignored. Active discussion and consideration of these roles and then adopting them is the hallmark of every single High Performance Work Team that we have worked with. And without HPWTs, chasing Category Management is a fool’s errand?