Trending
You are at:Home»Blog-News U can Use»Don’t Shoot – The Messenger May be MORE Important than the Message! 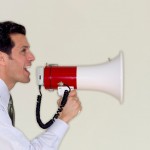 How many times have you had to deliver bad news and your opening line was, “Don’t shoot the messenger!”   As we think about and develop communications, both internal and external, we often agonize over form, format, timing, messaging, technology, etc. in an attempt to ensure that what we are communicating will be heard, spread to others and even acted upon.  What we don’t think about often enough is the messenger.

In an article I read in Harvard Business review “The Other Factor that Makes an Idea Spread”, author Julianne Wurm notes that “. . . . . much of the desire to share an idea with others was linked to that idea’s carrier. It’s the carrier who gets the audience to open up, trust, and ultimately spread the idea. Some well-known examples of carriers of ideas would include Daniel Goleman, who popularized the idea of emotional intelligence in 1995 although the concepts and research were actually conducted by John Mayer and Peter Salovey. Malcolm Gladwell has brought forth the ideas of others in nearly all his books from Blink to The Tipping Point and Outliers. Maria Popova of the popular blog Brainpickings  connects different theories and opinions in unexpected ways.”

I found this article interesting because communication and the ability to share and spread our ideas / recommendations is the most critical element of our jobs as Sourcing professionals.  If you buy the fact that most of our issues are internal – and believe me they are, STILL, then communication as a change management tool is critical to our success.  If the messenger really does matter, as noted above,  then we need to ensure that our messages are delivered by the most effective messenger we can find.

Here are some of the attributes of an effective messenger:

By the way,  messengers can / should change depending on the content of your message and the recipient.  As such, developing a communication plan that includes the messenger as a key element is important. As you are deciding on your carrier, consider the attributes of a successful messenger.  Don’t assume that the most senior person in the organization is automatically the ideal messenger because the opposite may be true.

When asked by our clients, “who is the first person you would hire for your Sourcing organization?” we always answer –  a marketing / communication star.  The reason is that “selling the change” is by far the most critical activity for an organization that is trying to change behavior across the organization and communication is on the top of the list in “selling the change”.  As you are considering which competencies are most critical in your sourcing professionals – it is strong communication skills.  If that is a skill gap for your organization, that may be the reason you are not making headway with your internal issues.

Remember, the next time you have an important message to communicate, make sure your messenger is embraced, not shot!