Trending
You are at:Home»Blog-News U can Use»How Well Off Are You?

Quick – Name the continent that would be ranked the highest if you were to conduct a survey based on Well-Being.  If you answered the Americas you would go to the head of the class.  If asked to name the highest ranked country in the Americas and you named the USA you would be kicked out of the class and the school for being a dunce!  Because if you applied the traditional metrics of Well-Being (money, house, car, etc., etc.), you would end up wanting to move to the USA – which would be a huge mistake (according to Gallup).  If you applied the metrics that Gallup just used, you would end up moving to……well, that comes later.

There are 5 elements that Gallup used:

And before we dismiss this as just another hokey gimmick, this is very similar to the Gross National Happiness (GNH) Index introduced by the King of Bhutan and the Third Way launched by Arianna Huffington.  By the way, this is also pretty close to Maslow’s Hierarchy of Needs (“physiological”, “safety”, “belongingness” and “love”, “esteem”, “self-actualization”, and “self-transcendence”) which goes back decades.

Now you may be wondering what this has to do with Sourcing / Supply Chain and I would ask you to think about the “Strategic Sourcing is Dead” series  or the long discussion we’ve been having about Value Drivers.  If all we do is define Value based on cost reduction, then we end up missing a lot of other far more important Value Drivers that actually change our solutions dramatically.  And by the way, we also end up not enrolling the stakeholders who own the missing Value Drivers and potentially having them as resistors.  And please don’t fall into the trap of measurability – we can only consider those things that we can quantify.  Quite the opposite – the Value Drivers that we cannot quantify may have a far greater impact than the ones we can.  Many times organizations tend to ignore those non-quantifiable Value Drivers because they don’t think they can convince their Executives.  By the way, there are a number of techniques to combine quantifiable and non-quantifiable Value Drivers into a very sophisticated decision model that Executives are quite comfortable using – we’ve been doing it for quite a while with clients.

In their study which spanned 145 countries, Gallup interviewed almost 150,000 people and it might surprise you to know that the USA was not even in the top 10!!! 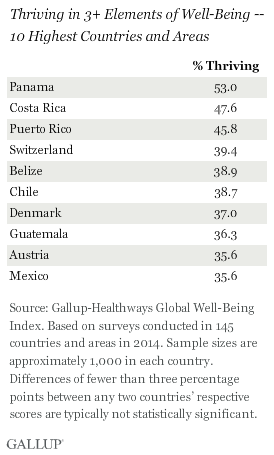 What should be apparent is that GDP has nothing to do with the rankings, so clearly traditional Value Drivers don’t work.  While most people will have trouble locating Panama on the map, clearly the people there are doing quite well – even though their income levels may not match the USA.  Are you surprised to see Puerto Rico, Belize, Chile, Guatemala and Mexico in the top 10?  While we may think that according to our Value Drivers these countries are not doing well, according to their Value Drivers – they are doing phenomenal.  In addition to Value not being quantifiable, it MUST also be defined by the user.

It would seem to suggest that while we, in the USA, may think that we are quite advanced and operating at the highest level of Maslow’s hierarchy, we may actually be stuck at much lower levels and not even know it.  A colleague compared this to a gerbil running on a wheel endlessly in a cage – quite depressing!  After that comment, I’m looking into Panama…..